1. What is OLED display?

OLED (or organic light-emitting diode) is a display technology that runs a current through organic diodes on a glass substrate to create an image. The light-emitting pixels of an OLED display emit blue and yellow light. The yellow and blue light combine to form white light, which then passes through red, green, and blue subpixels to produce a single pixel. Because each pixel handles its own light and color, OLED displays do not need a separate backlight.

2. What are the types of OLED?

PMOLED stands for Passive Matrix Organic Light Emitting Diode, is fabricated of emitting OLED pixel arrays configured in columns and rows with each pixel intersecting at a column row. These OLED pixels are arranged where their anodes are current driven by an electronic controller chip which also controls the cathode turn on to produce the desired display image. The PMOLEDs are easy to find and much cheaper than other LEDs, but they cannot work for a long duration as their lifespan is very short. Therefore, this type of display screen is generally for small devices up to 3 inches.

AMOLED stands for Active Matrix Organic Light Emitting Diode, is fabricated similarly to a TFT display with each individual pixel element being addressable unlike the row and column design of a PMOLED. This type of display is generally for large platforms. It contains TFT, which further consists of a storage capacitor. It also works on the same principle as OLED displays.

The difference between the two is that PMOLED is better for displaying text because it continuously scans the entire array of OLED columns and rows to produce an image at a given frame rate. This may result in perceived ghosting when displaying moving images. In contrast, since AMOLED does not need to scan the entire array, each individual OLED pixel can be turned on individually, which makes AMOLED without any ghosting in motion image processing, and this individual pixel design also allows better Lighting controls for brighter, higher contrast, more energy efficient displays.

3. What is the difference between OLED and LCD? 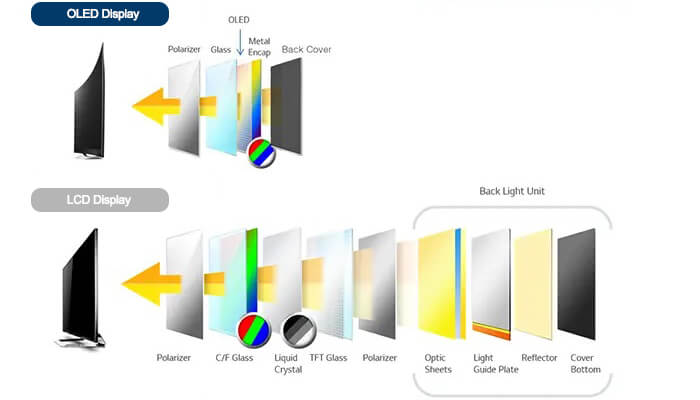 1) The plastic, organic layers of an OLED display are thinner, lighter and more flexible than the crystalline layers in an LED or LCD.Because the light-emitting layers of an OLED are lighter, the substrate of an OLED can be flexible instead of rigid. OLED substrates can be plastic rather than the glass used for LEDs and LCDs.
2) OLEDs are brighter and more colors with greater color accuracy than LEDs. Because the organic layers of an OLED are much thinner than the corresponding inorganic crystal layers of an LED, the conductive and emissive layers of an OLED can be multi-layered. Also, LEDs and LCDs require glass for support, and glass absorbs some light. OLEDs do not require glass.
3) OLEDs do not require backlighting like LCDs. LCDs work by selectively blocking areas of the backlight to make the images that you see, while OLEDs generate light themselves. Because OLEDs do not require backlighting, they consume much less power than LCDs (most of the LCD power goes to the backlighting). This is especially important for battery-operated devices such as cell phones.
4) OLEDs are easier to produce and can be made to larger sizes. Because OLEDs are essentially plastics, they can be made into large, thin sheets. It is much more difficult to grow and lay down so many liquid crystals.
5) OLEDs have large fields of view, about 170 degrees. Because LCDs work by blocking light, they have an inherent viewing obstacle from certain angles. OLEDs produce their own light, so they have a much wider viewing range.
6) The OLED display improves the response time of the LCD. While the response time of an LCD is typically around 5ms, the pixel response time of an OLED display is almost instantaneous. LCDs generally have low response times because to change from one color to another they have to physically change the orientation of the liquid crystal, which takes time. OLED displays turn subpixels on or off with electrical charge, giving them faster pixel response times. Fast pixel response times mean that high refresh rate displays are easier to make with OLED displays than with LCDs.

In a nutshell, the purpose of OLED is to create digital displays that can be incorporated into portable system devices such as TV screens, computer monitors, smartphones, handheld game consoles, etc.
1) TVs and Monitors
Currently, all companies are working on OLED displays to make their products smart, be it flat and curved TVs or so-called OLED wallpapers.
2) Smartphones and Tablets
OLED devices remain promising in the mobile device market, with most leading smartphones and tablets built using Active Matrix OLED (AMOLED).
3) Wearables
OLED microdisplays are integrated into virtual reality (VR) headsets due to their special refresh rate and lower brightness levels. OLED devices can produce half the nits of an LCD display while still reproducing HDR content on the screen, which is good for reducing eye strain.
4) Light Panels
OLED technology enables large-area light panels. OLED displays can be used to create flexible, transparent and color-tunable light panels. OLED panels emit diffuse light that is very close to natural sunlight.
5) Digital Cameras
In digital camera screens or electronic viewfinders, the use of OLED is growing, and some mid-to-high-end products have seen its applications everywhere.